It was late in the spring and only the north side snow drifts remain. An acorn drops to the soft, moist ground and rolls into the sunlight past the tree’s shadow horizon. The little acorn is the hope of a magnificent oak tree; a mother tree that is standing alone in all her majesty, overseeing miles of rolling prairie.

A prairie dog with two pups in her den gathered the seed and stores it in her cheek pouch for later use. Cheeks and belly full, this mother bee lines her way back to the larder and her babies.

In a nest placed high on a canyon wall, two young eaglets extend their necks and beaks skyward in anticipation. Below them, a swiftly moving stream roars, fed by the melting, high mountain snow.

Mom golden eagle flies across the river carved chasm toward that waving prairie. She needs to find the next meal for her children’s insatiable appetite.

Circling, her incredible sight detects motion. She measures the distance, speed, and direction of the victim. She stalls, gathers herself, and starts her hunting dive. The distance is closed quickly. At the last moment, the prairie dog screams the “eagle alert” and accelerates to try and reach her burrow before the eagle can catch her.

The distance to the entrance is just too far and the speed of the eagle, too fast. The blow of the talons knocks the victim from its feet. The eagle flares its wings and quickly grabs the prairie dog. Four hard wing beats, and the limp prairie dog is on its way to the cliff side nursery.

The still warm meal was delivered to the screaming offspring. Everything was devoured, except the fur, some bones, and the cached acorns. This waste was thrown overboard as the eagle did her nest keeping to keep the flies away and prevent diseases. The leftover fur floated in the updraft away from the nest, and the acorns bounced down the sides of the canyon. All but one acorn lodged in the stones and rocks on the slant of the canyons bottom. One acorn hit a boulder at the bottom and ping ponged into the white foam of the life giving stream.

On it went, up and down, riding the rushing water, getting caught in an eddy and escaping again. It rode the water through the canyon, all the while soaking up moisture and gaining weight. The force of a quick turn in the stream tossed the little acorn up onto a sandbar at the river’s outer edge. The small, pulsing waves pushed and pushed. Finally, as high as the acorn could go, the water washed sand over the seed and buried it.

During the “dog days” of summer, the river receded, and the high sun warmed the sand. The little acorn warmed enough to sprout roots and take hold. It had to grow and build its roots quickly, or the next year’s runoff would wash it away.

The summer suns and moons passed over, and the little seed grew two feet tall with roots that firmly anchored deep. It was a child worthy of its parent. It’s mother’s legacy to its offspring was to be strong and a survivor. If the prairie tree only knew, how proud it would be of her little vagabond.

Then, one cool day in the fall, a young boy nicknamed “Josh” was wandering along the relaxed streams shoreline. Shiny, polished rocks, amazingly shaped shards of wood, and other interesting treasures could be found here when the water receded in the fall.

The sun was getting low in the sky and the boy turned to head home. When he ‘about faced’ to retrace his steps, a proud two foot tall tree caught his attention. He’d often heard his mother say she’d like a shade tree by the back porch. It could shade the porch while she was doing the laundry on those hot summer days. Reaching down, he gently pulled the tree from the sand and carried it home.

After supper, while sitting on the back porch in the evening breeze, his mother asked the boy how his day had gone. She noticed the pile of his collected treasures on the top of the old wringer washer, and asked where he’d found it all. He told her of his walk along the stream.

Each collection is a mother’s reminder that she has a normal and curious boy. She knows not to throw this fine stuff away because these are her collection of precious memories.

She asked about the tree. He told her, it was for her shade over the back porch. Giggling, she explained that they had better plant it before it dried out and died. So, they dug the hole for the tree together and planted the little oak tree in the agreed upon ‘perfect spot’.

Summers went by; the tree and little boy grew. The good soil and rain from the downspout on the house gave the little tree more than enough to achieve the magnificence of its bearer. So it did. One strong limb had grown eight feet off the ground. It became the home of a rope and board seat swing.

His mother loved to sit in the swing and slowly push back and forth with her feet while his dad sat in an old rocking chair up on the porch. The rope would creak, and the rhythm of the swinging and rocking would provide a relaxing end to the day. His parents would run out of talk, tire, say “goodnight”, and go in the house. The screen door squeaked open, and slammed closed.

Joshua was left to sit by himself on the board swing, listen to the night sounds, and think.

He had educated himself as well as he was able in this little town. After school, the owner of the local drug store and soda fountain would allow him sit in the corner by the magazines and read everything for free. He’d read of worldly things, people, and places. Sometimes he would forget about time, so the soda fountain lady would have to remind him to go home for supper!

The boy grew in body and mind. His dreams and knowledge fueled his ambitions well beyond the boundaries of this little town. After he had finished High School, he took classes at the community college satellite and received an associate degree in fine arts.

Then one morning, all sameness stopped.  His parents found him up, bags packed, and a twinkle in his eye. They asked what he was up to. He told them what they feared but knew had to happen with him. He had to leave in order to grow. He was going to move to the state capital and find a job, and go to college.

They asked how and when he’d thought of such a thing.

He told them, “I made up my mind last night, on the swing under the thinkin’ tree!”

They felt this day was coming, but didn’t say anything to each other. He had been quiet the last couple of weeks. They know he came from good stock, and did need room to grow.

As he answered, a bus horn sounded outside. He kissed his mom, shook his dad’s hand, and grabbed his suitcase. Carrying a piece of toast in his mouth, he said something about coming home every other weekend, as he ran through the doorway.

They watched him get on the bus. Through the open bus door, they could see him give his ticket to the driver. They could see his silhouette walking toward the back of the bus trying to find a window seat on their side of the bus. When he found one, he smiled a big smile and waved.

The bus kicked up a billowing cloud of road dust as it rolled toward the rising sun.

In his pants pocket, he had a “good luck” acorn from his “thinkin’ tree”. A grandseed from the mother tree was rolling again, a vagabond. 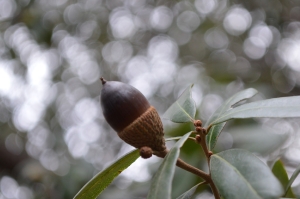 © Copyright 2011 gottagosee (UN: gottagosee at Writing.Com). All rights reserved. gottagosee has granted Writing.Com, its affiliates and syndicates non-exclusive rights to display this work.

This site uses Akismet to reduce spam. Learn how your comment data is processed.